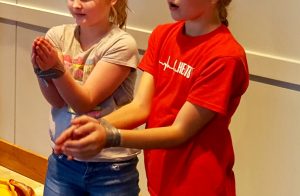 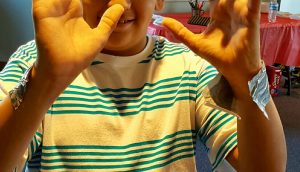 What would you do if an attacker came up to you, weapon in hand, if he pinned you down on the floor and put you in a choke hold? What if your wrists were bound with duct tape and you were taken against your will? Up until recently, I admit I had no clue what I would do. And ignorance is not a good thing in any of those situations.

Last month A.C., a friend and an expert in self-defense, conducted a self-defense class for TMC and the people we serve. Over 50 of our friends participated in the class; they were taught and shown specific responses and techniques they could use for survival and escape. With repetition and practice these self-defense moves are life savers. The pictures above show some participants learning how to break free from duct tape. We employed what we learned by practicing after each expo– and we amazed ourselves! Breaking free is exhilarating….

The Attorney General reports that the Super Bowl is the single largest human trafficking event in the United States each year. My mind and heart are focused on “breaking free,” because I just returned from four days of Super-Bowl-hype in Houston. In Houston I had the game-changing opportunity to participate in sex trafficking interventions, and to hear from some amazing, fully-engaged abolitionists and survivors. The commercial sex industry is fueled and sustained by money, greed, exploitation, and manipulation. And the most vulnerable in this industry are women and children. As I met some of these precious, hurting women and survivors face-to-face in Houston, I was at once both broken and captured by the painful reality of modern day slavery. And the sad truth is that in the past two years I have seen the destruction that reality causes. Here. In my hometown. It isn’t just big cities like Houston or Memphis. It is everywhere. Women and children are groomed, used, and trafficked for sex.

My heart cries out with a love song of freedom! Breaking free? The love of Christ would win this battle!  Women who are trapped, used, and trafficked don’t have a clue where to turn. It is time to enter this battle. Benjamin Nolot, founder of Exodus Cry, takes it to gut level: “Compassion isn’t something you do. Compassion is someone you become.”

“Therefore I will rescue My flock and they shall no more be a prey…” Ezekiel 34:22